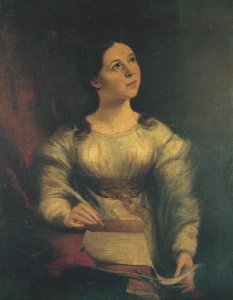 On 29 June 1961, exactly one hundred years after the death of Elizabeth Barrett Browning, I stood with Mr. and Mrs. Kenneth A. Moulton-Barrett in a dark, panelled solicitor’s office in St. James’s, London. On a table before us was a black deal coach-box, encrusted with a multiplicity of colored wax seals. The box, containing Moulton-Barrett family papers that had been collected for nearly two centuries, was from the estate of Mr. Moulton-Barrett’s father, the late Lt.-Col. Harry Peyton Moulton-Barrett—a nephew of the poetess. The exact nature of the papers was unknown.

For some time I had been seeking, for inclusion in an edition of the correspondence of the Brownings, the letters that EBB had written to her father following her marriage to Robert Browning. I had seen evidence, in other family papers, that these letters had been sent to Harry Peyton in February 1924—and as I stood to one side, while the seals on the box were being broken, I was hoping that my search had at last ended. With formalities done, I made a cursory search of the box and was disappointed to find that these long-sought letters were not in it. However, my disappointment was lessened by the appearance of a manuscript, bound in a paper wrapper and annotated in the hand of Robert Browning—“Diary by E.B.B.”

Mr. Moulton-Barrett withdrew the collection from the solicitor’s care and entrusted the box to me so that I could study its contents at leisure. For the next three months I was absorbed in compiling a checklist of the some 900 items in the collection, and in making and collating an initial transcript of the Diary, with the assistance of Ronald Hudson. Later we co-edited the manuscript and published it as Diary by E.B.B.: The Unpublished Diary of Elizabeth Barrett Barrett, 1831–1832 (Athens, Ohio: Ohio University Press, 1969), the source of this electronic presentation.

Most probably, the Diary, as written, encompassed the twelve-month period June 1831 to the end of May 1832, but it was shortened appreciably when the entries for about sixty days were excised and presumably destroyed. The manuscript of the Diary is divided into two parts. The first, containing the entries for 1831, consists of 85 folded sheets (i.e., 340 pages) of quality paper, with a final leaf, the verso of which is marbled. A study of this part of the Diary shows that the sheets were subsequently sewn together, although only a small amount of the silk thread remained when the manuscript was found, and this has since been removed. The 341 pages are encased in a wrapper of manilla-paper; it is annotated in the hand of Robert Browning: “Diary by E.B.B.” This part of the Diary is enclosed in a black slip case of contemporary date.

The second part of the Diary contains the entries for 1832, and is written in the central section of a volume of 374 pages used by EBB for making general notes on her reading. This section containing the Diary originally covered 144 pages, of which 56 pages (i.e., 28 leaves) were subsequently wholly excised, and 18 pages excised in part. It is bound in russia, stamped in blind with a diamond design, and bears a brass clasp.

In May 1848, EBB wrote from Italy to her sister: “Dearest Arabel, any papers of mine, letters, &c left in Wimpole St—(& there was a deal box full, which came from Hope End besides the green box,) these things I beg you to take care of for me—& we will make a bonfire of many of them when we meet.” EBB refers to a deal coach-box that was used by the Moulton-Barretts to transfer items between Hope End and London—the same box that held the Diary in 1961. The sisters never made a bonfire of EBB’s papers and the Diary remained with Arabella. Upon EBB’s death in 1861 and Browning’s return to England, Arabella gave him various items from the box, including the first part of the Diary. Upon Browning’s death it passed into the possession of the poets’ son, Robert Barrett Browning, and was one of the items withheld by the Moulton-Barrett family when the estate was dispersed by auction in May 1913. It and other items retained by the family were lodged with a London solicitor until 1924, when by general family consent Lt.-Col. Harry Peyton Moulton-Barrett took charge of them.

Upon Arabella’s death in 1868, the second part of the Diary and other papers in the deal box, including her own letters from EBB, became the property of their brother George. In 1887 Browning expressed fears to George about the possible misuse of EBB’s letters and  papers after the two of them were dead. Consequently, it was almost certainly George who was responsible for the obliterations and excisions which mar the reading of the second part of the Diary. When George died in 1895, his papers, including his letters from the poets, passed to another brother, Henry, who died in the following year, leaving the collection to his eldest son, the Rev. Frank Morris Moulton-Barrett, who in turn bequeathed it to his brother Harry Peyton.

Thus it was not until 1924, when Harry Peyton took possession of the residue of the material from Robert Barrett Browning’s estate, that the two halves of the Diary were reunited, the separation having preserved the first part from the censorship suffered by the second.

When Harry Peyton died in 1937, his collection was dispersed, most of it being sold at public auction. The remainder, including the two parts of the Diary, eventually became the joint property of his sons, Edward S. and Kenneth A. Moulton-Barrett, from whom, early in 1965, it was acquired by the Henry W. and Albert A. Berg Collection of the New York Public Library.

Editorial work on The Brownings’ Correspondence is supported by the National Endowment for the Humanities.