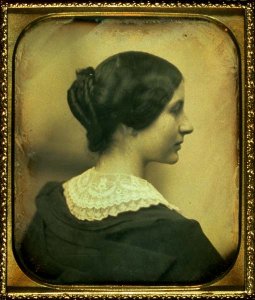 Annie Adams Fields (1834–1915), literary hostess, author, and social reformer, was born on 6 June 1834 to Zabdiel Boylston Adams and his wife, Sarah May (née Holland). Her father, a Boston physician who taught at Harvard Medical School, was descended from the Braintree Adamses, the family that produced two U.S. presidents. Annie was educated at home and at George B. Emerson’s School for Young Ladies.

In November 1854, at the age of twenty, she married James Thomas Fields, a man seventeen years her senior, who was a partner in the Boston publishing firm of Ticknor and Fields. She later recorded that the marriage to Fields had swept her “upon a tide more swift and strong and all enfolding than her imagination had foretold.”

In June 1859 Annie and her husband sailed for Europe and a yearlong holiday. Their first stop was London where they made the acquaintance of Charles Dickens. On one of their excursions from town they stayed a few days with the Alfred Tennysons on the Isle of Wight. In August the Fieldses left for the continent, eventually making their way to Italy and Rome where they called on Robert and Elizabeth Barrett Browning in February 1860.

In America, the Fieldses resided at 148 Charles Street, Boston, and later (1875) spent their summers at Manchester-by-the-Sea. Annie’s charm, intelligence, and beauty—along with her husband’s easy-going friendliness—made the Fields home famous for its hospitality. Annie became one of the premier hostesses of her time and entertained most of the literary lights of the day, including Ralph Waldo Emerson, Henry Wadsworth Longfellow, Nathaniel Hawthorne, Oliver Wendell Holmes, John Greenleaf Whittier, and Harriet Beecher Stowe, as well as many of the period’s eminent statesmen, scientists, artists, and musicians.

Annie Adams Fields’s diary of sixty-one volumes covers the years 1859–1860 (the period of her European tour), and 1863–1877, which centers on the Fieldses’ life in Massachusetts. The diary shows Annie to have been a sympathetic listener and observer. In December 1863, an ailing Nathaniel Hawthorne (he died five months later) stayed with the Fieldses and spoke of a brief idyllic period in his childhood. At eleven years old he went to live in Maine with his mother and sister: “From that moment the happiest period of his life began and lasted until he was thirteen when he was sent to school in Salem. While in Maine he lived like a bird of the air so perfect was the freedom he enjoyed. During the moonlights of winter he would skate until midnight alone upon the icy face of Sebago Lake. … All the long summer days he roamed at will … through the woods and there he learned nearness to nature and a love for free life which has never left him and made all other existence in a measure insupportable.”

On 21 November 1867, Annie recorded her impressions of a dinner she hosted for Charles Dickens, who was just beginning his second American tour. Among the famous guests were Emerson, Longfellow, Holmes and Professor Louis Agassiz, who told a risqué anecdote about Benjamin Franklin that the company found most amusing. Meanwhile, the guest of honor “bubbled over with fun. … He is very fond of Carlyle … and gave the most irresistible imitation of him. His queer turns of expression often convulsed us with laughter.”

James T. Fields drew heavily on his wife’s diary when he prepared his essays on Dickens and Hawthorne, which appeared first in The Atlantic Monthly (1871) and then in Yesterdays with Authors (1872). Later, Annie’s literary executor, Mark A. DeWolfe Howe, would do the same for his biography of her, Memories of a Hostess: A Chronicle of Eminent Friendships (1922).

While the diary has been consulted and cited by various writers and scholars, it remains for the most part untapped. Its principal value to scholarship rests in providing a wealth of reminiscences, reconstructed conversations, anecdotes, and critical analyses of leading contemporary figures.

James Thomas Fields was Robert Browning’s American publisher. Fields had met the Brownings on several occasions during a visit to Europe in 1851–1852, prior to his marriage to Annie. Although the firm Ticknor, Reed, and Fields, the predecessor of Ticknor and Fields, had pirated Browning’s Poems (1849), the meetings between the two men were amicable. In 1855 there followed an authorized publication of Men and Women.

In the early weeks of 1860 the Brownings renewed their acquaintance with Fields at Rome and were delighted with his wife. The Fieldses called on the poets frequently while in Italy, and Annie faithfully recorded these meetings. On the day of her first visit to the poets (14 February 1860), she wrote: “We are to see the Brownings today and can think of nothing else.” Afterwards, that same day, she described what she had seen and heard: “Browning talked about ‘Sordello’ and his desire to finish it at which his wife looked at him with a curious doubting expression which at last came out in words. ‘Oh! Robert I’m afraid you’ll never make that clear!’ He was arranging the fire when she spoke so that his face was hidden but when he turned to look at us and answer there was not the least shadow of annoyance about him only a radiant expression of confidence in himself and belief in her as if he were saying ‘Well! if she thinks I can’t do that she knows well what I can do’ mingled with an amused look, that she should think the idea so droll.”

With Fields’s release of the American edition of Browning’s The Ring and the Book (1869), there was a rupture in the friendship of the publisher and the poet that was never fully reconciled. The diary entries that Annie made during an 1869 stay in London indicate something of this estrangement. On 26 May, after attending a dinner party at which the poet was present, Annie wrote: “Browning was like a piece of polished steel, receiving on his surface keen reflections of persons and giving back sharp points of light. He is scornful, unsympathetic, powerful and swift. Ah! It seems as if a demon held him.”

For additional information on the Brownings’ relationship with the Fieldses, see the biographical sketch of James Thomas Fields in The Brownings’ Correspondence, 27, 325–331,

Annie Adams Fields’s Diary is preserved in the Annie Fields papers (Ms. N-1221) of the Massachusetts Historical Society, Boston. I gratefully acknowledge that institution for permission to mount this electronic edition on the internet.

Editorial work on The Brownings’ Correspondence is supported by the National Endowment for the Humanities.